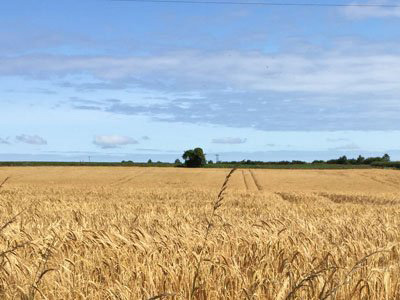 A Norfolk Field and Skyline

Norfolk is a diverse county and as the soil was easily tilled, most of the first farming settlers lived in the west of the region (see Norfolk Areas). During prehistoric times, miners dug tunnels and flint mines to get their hands on the best materials for tool making. At Grimes Graves on the heathlands, near the border with Suffolk, are round barrows, or graves, showing where Bronze Age men buried their dead.

During the 1st century A.D., Norfolk was the home of Boadicca (also known as bonduca, boadicea, boudicca and the warrior queen), Queen of the Iceni, who led an uprising to try and prevent the invading Romans from seizing her kingdom during the reign of Emperor Nero. She almost accomplished this and nearly destroyed the Roman government in Britain. There are still many traces of Roman occupation in Norfolk, including the Roman Fort ruins at Caister-on-Sea and several Roman roads. The best known Roman road is Peddars Way which was originally a pre-Roman track and runs southward from the coast (probably Brancaster Bay) and is still traceable on Roundham Heath near Thetford.

The kingdom of East Anglia was formed by Norfolk during the Anglo-Saxon times, and Thetford, on the Norfolk and Suffolk border, was one of the most important towns in the county. It had an early cathedral and a mint for making money. The Danes marched on Thetford in 870 and fought with the Christian king Edmund. The Danes were victorious and it is believed that they killed King Edmund just with arrows. Edmund was later made a saint and buried in the town known today as Bury St. Edmunds.

In the middle ages there were more people living in Norfolk than in any other part of England. These included many rich farmers and wealthy wool merchants who used some of their money to build great churches. This is why many small villages in Norfolk today have churches that are too large for them. Great monasteries were also built in Norwich, Thetford, Kings Lynn and Great Yarmouth as well as many places in the countryside. The best remains of a monastery are those of the 11th-century Castle Acre Priory near Kings Lynn.

At the end of the middle ages there was much discontent in Norfolk when commons and waste lands were enclosed and taken away from the peasants. In 1549 Robert Ket, a Wymondham man, led an army of rebels to Norwich and attacked the city. However, after several weeks of being in possession of it the rebels were defeated by the kings army and Robert Ket was executed at Norwich Castle.

Hingham, west of Wymondham, was the home of a family named Lincoln. One of these left England for America and was an ancestor of Abraham Lincoln, the president of the United States at the time of the American Civil War. Much of our knowledge of the Norfolk people comes from the 15th-century letters of the Paston family in Norfolk. The Pastons were mostly lawyers with a great deal of land and Margaret Paston, who wrote many of the letters concerning business and marriages, was buried in the church of St Peter and St Paul in the small village of Mautby close to Filby and Caister-on-Sea.

Sir Robert Walpole, who was England's first prime minister, was born at Houghton near Walsingham in 1676. Sarah Martin, who became a dedicated prison visitor and reformer, and devoted to the inmates of Great Yarmouth's Tolhouse Gaol, was born in Caister-on-Sea in June 1791. Lord Nelson was born at Burnham Thorpe in the north of Norfolk. Sandringham House also in the north of the county is one of the Royal Family's country homes.

Today is:
Copyright © 2017-2022 caistercaravan.co.uk. All rights reserved.
CaisterCaravan is not responsible for the content of external sites.
Designated trademarks, logos, brands and images are the copyright and/or property of their respective owners.
Great Yarmouth Tourist Office, Maritime House, 25 Marine Parade, Great Yarmouth NR30 2EN
www.great-yarmouth.co.uk
You are here:
Ref: 4900 11177