You are here: Home > Articles > Wymondham 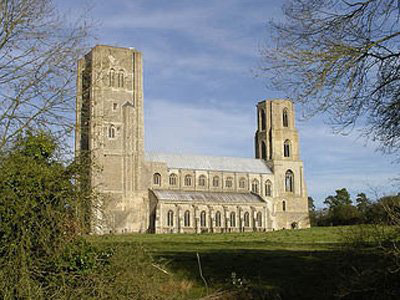 The Town of Wymondham, Norfolk

Wymondham (pronounced 'Windam') is a small historic market town in Norfolk with quaint streets and a thriving town centre, and dominated by the partly ruined, twin-towered Wymondham Abbey. The town is steeped in history and has many old, well-preserved buildings such as the Green Dragon in Church Street which formerly belonged to the priory and the old wooden Market Cross built in 1616, and a good choice of high quality shops, cafes and traditional pubs. Wymondham is considered to be one of the best places to live in Britain.

Wymondham Abbey was founded in 1107 by William d'Albini who was the chief butler to King Henry I, and he is buried in the Abbey church before the high altar. The abbey was attached to St Albans, a monastery of the Benedictine friars who were the richest and most influential order in England during the Middle Ages. In the early 13th century the local people of Wymondham and the monks did not get on with each other so much so that in 1249 Pope Innocent IV had to intervene as each side wanted to ring their own bells in the Abbey church. Mediation did not solve the quarrels so the Abbey church, which was completed in c.1130 was divided by a wall across the 'choir' and two bell towers were built. The local Wymondham folk rang their bells in the west tower and the monks from the octagon tower. After the Reformation and when when King Henry VIII ordered the destruction of all monasteries, priories, and convents, the eastern end of the church was torn down with the cloister, chapterhouse and various abbey buildings. Only the nave and galleries remained. The nave survived because it was the parish church and has nine bays with Norman arcades with square massive piers, and the arches are adorned with patterned cable mouldings. It is a fine fragment comparable with Norwich and Ely. Outside, the position of the cloister can still be traced to the south. The eastern gable of the Chapterhouse, which led out from the cloister on the east, is the largest ruin that survives.

The Great Fire of Wymondham in 1615

This damaging fire started on 11 June 1615 and two areas of Wymondham were badly affected. The Vicar Street and Middleton Street area and the Market Place area with Bridewell Street and Fairland Street both lost upwards of 300 wooden and thatched buildings (over a quarter of its homes) to the raging fire. It was believed that the fire was started by travellers William Flodder, his brother John Flodder, Ellen Pendleton and a local person, Margaret Bix. Once started, the fire spread quickly as it was a windy day and a Sunday when everyone was at church. The four arsonists were all executed on 2 December 1615.

At the end of the middle ages during the reign of King Edward VI there was much discontent in Norfolk when commons and waste lands were enclosed and taken away from the peasants. In July 1549 Robert Kett (or Ket), a Wymondham man, led an army of rebels who started destroying fences that had been put up by wealthy landowners. Kett then led them to Norwich and attacked the city. On the 1st of August the rebels defeated a Royal Army led by the Marquess of Northampton who had been sent by the government to suppress the uprising. However, after several weeks of being in possession of Norwich the rebels were defeated by the kings army and Robert Kett was tried for treason and hanged from the walls of Norwich Castle on 7 December 1549. Kett's Rebellion, which was also known as the Peasants' Revolt, is remembered on Wymondham's town sign.

Today is:
Copyright © 2017-2022 caistercaravan.co.uk. All rights reserved.
CaisterCaravan is not responsible for the content of external sites.
Designated trademarks, logos, brands and images are the copyright and/or property of their respective owners.
Great Yarmouth Tourist Office, Maritime House, 25 Marine Parade, Great Yarmouth NR30 2EN
www.great-yarmouth.co.uk
You are here:
Ref: 4876 11153