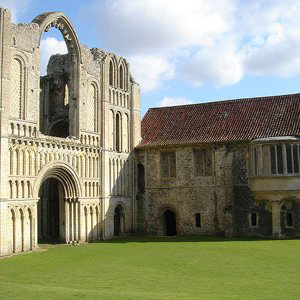 Castle Acre Priory was founded in 1089 by William de Warenne the son of the 1st Earl of Surrey following a visit to the great monastery in Cluny in France wth his wife. So impressed were they by its beauty and holiness that they vowed to introduce the Cluniac order of monks to England. Castle Acre quickly became a Cluniac priory and one of the many that were dissolved in 1537 under King Henry VIII's Reformation. The King gave the priory to the Duke of Norfolk complete with its estates and the remaining monks were turned out. The remains of the priory, which was originally situated within the walls of the Castle Priory Church until this proved too small and inconvenient for the monks, were handed over by the the [then] owner Lord Leicester in 1929 and they are now in the care of English Heritage along with the nearby Castle Acre Bailey Gate and Castle Acre Castle. Castle Acre Priory is one of the best preserved monastic ruins in Norfolk and great care was taken to excavate and conserve this important monument. Castle Acre Priory was the second House of this Order in England and was directly subject to the authority of the Abbot of Cluny.

The ruins are entered through a fine late 15th century gateway of brick and flint bearing shields of the Royal Arms of Warenne, FitzAlan and Maltravers. The church, with its magnificent late 12th century west front of interlacing arcades, was constructed of flint encased in finely worked ashlar. The inner walls of the west end of the priory church still display some of the decorated arches and columns dating back to the 12th century. Of special interest are the remains of the sacristy, which lies to the north of the north transept, and contains a small brick oven for baking the sacramental wafer. The claustral buildings are extensive and all the features of a great monastic institution can be traced. Happily, the prior's lodging, chapel, and associated chambers, which adjoin the west front of the church are well preserved and form a most picturesque group of buildings of various dates. Castle Acre Priory lies in the Nar Valley in a rural setting and the remains are listed, grade I. The site is a scheduled ancient monument.

Castle Acre, a tranquil rural village in Norfolk, boasts an extraordinary wealth of history. It is a rare and complete survival of a Norman planned settlement, including a castle, village, parish church and one of the best-preserved monastic sites in England, Castle Acre Priory. All this was the work of a great Norman baronial family, the Warennes, mainly during the 11th and 12th centuries. From a small price for a year's membership, English Heritage members enjoy unlimited access to over 400 historic properties across the country, a whole year’s worth of fun days out, free entry for up to six accompanying children per adult member, free or reduced-price entry to exclusive members’ events giving you access to our experts and a glimpse behind the scenes.

Today is:
Copyright © 2017-2022 caistercaravan.co.uk. All rights reserved.
CaisterCaravan is not responsible for the content of external sites.
Designated trademarks, logos, brands and images are the copyright and/or property of their respective owners.
Great Yarmouth Tourist Office, Maritime House, 25 Marine Parade, Great Yarmouth NR30 2EN
www.great-yarmouth.co.uk
You are here:
Ref: 4892 11169