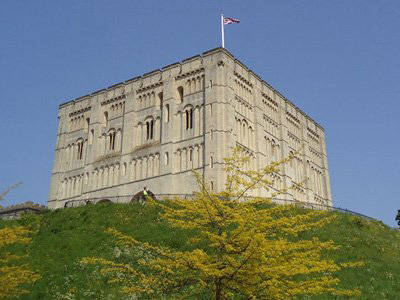 Norwich was an highly important regional capital in the Middle Ages and one of the foremost administration and business centres in East Anglia. It was the largest flint walled town in England at the time and today it still retains many of the historic well-preserved buildings and ruins, and fine evidence of Norman and medieval times. The narrow winding streets constantly remind visitors of its historic past.

Norwich Castle is now an impressive, Grade I listed ancient monument originally built by William the Conqueror following the Norman invasion and the demolition of almost 100 Saxon homes. It is a popular tourist attraction in Norwich and a local heritage site with a museum. The Norman castle, which was William the Conqueror's only castle in East Anglia, is steeped in history as it was used as a place of imprisonment and execution between 1220 to 1887 as well as a fortification. The iconic stone Norman keep is now the Norwich Castle Museum and Art Gallery. It is believed that Norwich Castle was built some time between 1066 and 1075 as the Normans swept through East Anglia. It was originally built as a motte and bailey castle on a huge man-made fortified mound and it dominated the countryside for miles around.

The first major historical incident at Norwich Castle was the Revolt of 1173 when King Henry II's sons started a civil war by rebelling against him, and the royal castle was made ready for defence. However, the castle was captured by Hugh Bigod, 1st Earl of Norfolk, with over 800 soldiers and supporters in 1174. Norwich Castle remained in Bigod's possession until the end of the rebellion when it was returned to royal control.

From about 1220, Norwich Castle was used as a gaol and saw many prisoners incarcerated and executed until 1887 so it's no surprise that many visitors claim to have witnessed paranormal activity and events on the site. There is a long history of ghostly sightings and reports, with the most well known being the apparition of a lady dressed all in black who was executed after being accused of murdering her husband, a floating skull which just drifts through the air, and the ghostly sight of the rebel leader Robert Kett's body hanging from the top of the castle keep. Robert Kett was from Wymondham in Norfolk, and rebelled against the agricultural laws at the time.

Norwich was home to many famous people in history such as Elizabeth Fry, who did so much for prison reform, and Mother Juliana, a nun who lived in the 14th and 15th centuries and wrote a book called The Revelations of Divine Love. Lord Nelson was educated at Norwich Grammar School.

The painter John Chrome was born in Norwich in 1768 as the son of a weaver and helped start the Norwich School of Painters. He spent much of his life in Norfolk and many of his paintings of local landscapes and rivers are in the Norwich Castle Museum.

Today is:
Copyright © 2017-2022 caistercaravan.co.uk. All rights reserved.
CaisterCaravan is not responsible for the content of external sites.
Designated trademarks, logos, brands and images are the copyright and/or property of their respective owners.
Great Yarmouth Tourist Office, Maritime House, 25 Marine Parade, Great Yarmouth NR30 2EN
www.great-yarmouth.co.uk
You are here:
Ref: 1122