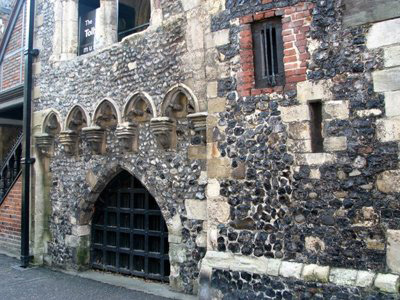 Sarah Martin was born in Caister-on-Sea in June 1791 to a local tradesman and his wife. She was orphaned at an early age then raised at Seagull Cottage on Beach Road by her grandmother who taught her to make gloves and sew whilst she attended the local village school. In her early years, Sarah showed little interest in the Bible despite the best efforts of her grandmother and at 14 years of age was sent to sent to Great Yarmouth to work as a dressmaker. Each day she walked from Caister to Yarmouth in the morning and back again at the end of the day.

It was during one of these walks that Sarah Martin heard religious messages being preached as she passed a local Christian meeting. She was 19 years old at the time. She immediately thought of Christ's work, forgiveness and salvation by God, and started to turn towards reading sermons and remembering much of God's word which gave her a determination to serve others. This was her religious conversion.

Sarah Martin then became a Sunday school teacher and in 1815 began visiting a local workhouse and then, shortly after, visited Yarmouth's prison (Tolhouse Gaol) which was in a deplorable state. The prisoners were kept together in a vermin-infested underground dungeon with no toilets. She now wanted to do what she could to improve the prison conditions and the lives of the prisoners.

In 1819 she devoted herself to the inmates and started to read the Bible, Scriptures and sermons to them as well as tirelessly teaching them valuable skills including reading and writing. They were taught to be more productive with their lives and shown how to make spoons carved out of bone, hats and books which Sarah sold for them so new clothing could be bought. The women prisoners were also taught to sew and make baby linen. During this period of her life, Sarah Martin kept careful records of the prisoners' progress and continued providing educational instruction and teaching workhouse children until 1838 when a new workhouse opened with two teachers. She then started to teach factory girls at the chancel of St. Nicholas Church in Yarmouth and continued to work towards improving the prison conditions and visiting the inmates.

A few years later Sarah's health began to seriously decline and she died in October 1843. Sarah Martin is buried in the graveyard of Holy Trinity Church, Caister (plot number 146), and her tombstone bears the words 'Now is Christ risen from the dead and become the first fruits of them that slept'. Her monument is at the parish church of St. Nicholas in Great Yarmouth.

The old Tolhouse Gaol in Great Yarmouth is now a museum with many displays and hands-on activities, and many opportunities to discover more about this building which was originally a 12th Century medieval merchant's house. There is a special room dedicated to the memory and work of Sarah Martin.

Today is:
Copyright © 2017-2022 caistercaravan.co.uk. All rights reserved.
CaisterCaravan is not responsible for the content of external sites.
Designated trademarks, logos, brands and images are the copyright and/or property of their respective owners.
Great Yarmouth Tourist Office, Maritime House, 25 Marine Parade, Great Yarmouth NR30 2EN
www.great-yarmouth.co.uk
You are here:
Ref: 4948 11225