You are here: Home > Villages > Mautby 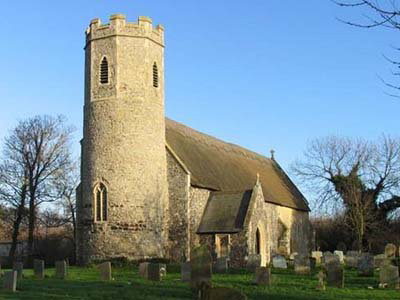 The small rural village of Mautby is just 4 miles from Caister-on-Sea and lies on the north bank of the River Bure on the Norfolk Broads. St Peter and St Paul is Mautby's small church with a thatched roof, a 15th century font, a striking and noteworty 20th century stained glass window showing St Thomas Aquinas saying Mass and St Clare with a monstance, and an unusual round tower that may have been used as a look-out during the English Civil War. The base of the tower and the north wall show traces of early 10th century Norman and Saxon stonework. The south aisle of the church was the burial place of Margaret Paston who is famous for the Paston Letters. However, during Victorian times this part of the church was demolished as the building was in urgent need of repair, and Margaret's remains now lie outside the church in an unmarked place. Margaret Paston's maiden name was Mauteby and one of her ancestors, Sir Walter de Mauteby, still has a tomb inside the church by the lecturn. The Mautebys were brought up in the nearby post-medieval Mautby Hall and Manor House, not far from Caister Castle, which had its own chapel and large chambers. St Peter and Paul Church is believed to date from the Norman conquest. 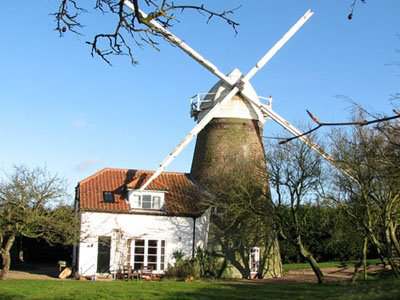 Mautby Marsh Farm Drainage Mill is 3-storeys high and built from red brick. The mill was built to drain the marshes into the River Bure. Windpower was supplemented by and eventually replaced by a Ruston & Hornsby oil engine that worked there from 1919 to 1968. The engine was housed in a separate shed until the mill ceased working. By the 1970s the mill was in a very derelict state until two ladies from London bought it and had it converted as a retirement home. A cottage was added on to one side of the mill tower. The cap was rebuilt and the workings hoisted back to the top and a new walkway around the cap, as well as new cross and sails were fashioned.

Today is:
Copyright © 2017-2022 caistercaravan.co.uk. All rights reserved.
CaisterCaravan is not responsible for the content of external sites.
Designated trademarks, logos, brands and images are the copyright and/or property of their respective owners.
Great Yarmouth Tourist Office, Maritime House, 25 Marine Parade, Great Yarmouth NR30 2EN
www.great-yarmouth.co.uk
You are here:
Ref: 4960 11237