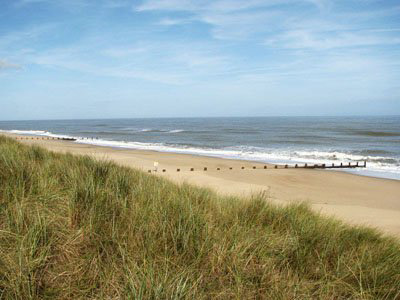 Sea Palling is a small village next to Waxham on the North Norfolk Coast, a designated Area of Outstanding Natural Beauty. It is part of the North Norfolk Heritage Coast and a popular tourist and holiday destination. Sea Palling has all the basics for an enjoyable and less-crowded holiday or leisure break with a lovely pub, bar, easy access to the Blue Flag sandy beach which it has been awarded for several years, farm shop, cafes, amusement arcades, post office, cycle hire and a general store. There is plenty of car parking space in the large car park and the village has a regular bus service to/from Norwich. Sea Palling is now on the North Norfolk Coastal Path which passes through Sheringham and the beautiful Norfolk countryside with stunning views of the coast. It is perfect for walkers, ramblers and hikers.

Close by is the Norfolk Wildlife Trust nature reserve near to Hickling Broad. The Trust manages some of the most inspiring wild spaces in the county. The National Trust Horsey Windpump is also close by and both make an enjoyable day out. Norwich, which is reputed to have had a pub or tavern for every day of the year and a church for every week, has abundant sightseeing and attractions, and Norwich Castle, St John the Baptist Cathedral and the Cow Tower ruins should be seen.

Sea Palling has a varied history. In 1287 there was a great storm and the neighbouring village of Waxham Parva disappeared under the huge waves with its church and land. The flood suffocated and drowned some of the villagers sleeping in their beds and destroyed houses. There were several more storms and floods over the next few centuries and Sea Palling's sea defences were breached in 1655 and again in 1741. Much later, the North Sea Flood of 1953 took more lives and caused more damage. Eventually, in 1986 and in 1995 the Environment Agency built four barrier reefs just offshore to break up huge incoming waves and carried out further improvements in 1998 and wooden groynes were built on the beaches. Sea Palling beach is now safe with the highest possible cleanliness rating and the sea being much calmer, so perfect for swimming. It is now a major attraction.

Sea Palling also suffered throughout history with smuggling which reached its peak in in the middle of the 18th century. Smuggling of tea and spirits started to decline after a Coastguard service was introduced in 1822. Some local villagers also engaged in salvage work but because of the dangerous nature of the work the prices they charged were often considered exhorbitant.

Sea Palling is just under 11 miles from Caister-on-Sea Holiday Park.

Today is:
Copyright © 2017-2022 caistercaravan.co.uk. All rights reserved.
CaisterCaravan is not responsible for the content of external sites.
Designated trademarks, logos, brands and images are the copyright and/or property of their respective owners.
Great Yarmouth Tourist Office, Maritime House, 25 Marine Parade, Great Yarmouth NR30 2EN
www.great-yarmouth.co.uk
You are here:
Ref: 4897 11174