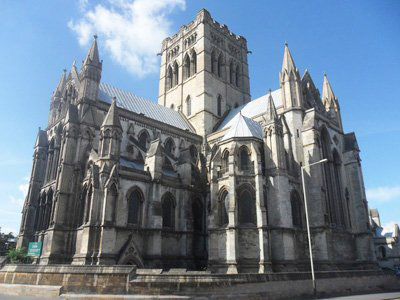 The Cathedral of St John the Baptist is a fine example of the great Victorian Gothic Revival and was constructed between 1882 and 1910 originally as a Catholic parish church. It was designed by George Gilbert Scott Junior on the site of the Norwich City Gaol (Jail). The building was paid for by the 15th Duke of Norfolk, Henry Fitzalan-Howard, head of one of the most powerful Catholic families in England, as a sign of gratitude to God for his first marriage to Lady Flora Abney-Hastings in 1877 and as a gift to the Catholics of Norwich to make his religion more acceptable to the English way of life.

The church, which was believed to be the largest parish church in England, was consecrated in 1976 as the cathedral church of the Diocese of East Anglia and became the seat of the Bishop of East Anglia. It is now a Grade 1 listed building and one of Norwich's most famous and iconic sights with a design that emulates 13th century Early English Gothic. This was considered by Victorians to be the most pure English style. It is one of two cathedrals in Norwich, the other being the Church of England Cathedral Church of the Holy and Undivided Trinity built from 1145 in the Norman style. St John the Baptist cathedral is the second largest in England.

St John the Baptist cathedral is a magnificent building with a stunning interior not to be missed by those interested in architectural history. The stonework, carvings and beautiful stained glass compliment the tranquil place of prayer. In 2010 the new Narthex (the entrance and lobby area in the grounds) is the main Visitor Centre and provides a focus for a wide range of community activities. Within the grounds there is an Education and Interpretation Gallery, a refectory with an outdoor patio, a function hall and a licensed bar. The Cathedral Garden is a community garden with fruit trees, formal lawns and the original rose garden, and is a secret haven which is maintained by volunteers. It can now be accessed when using the Garden Cafe.