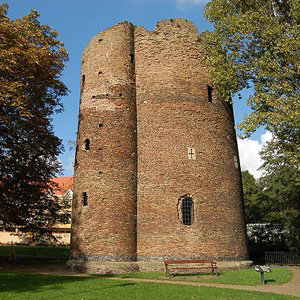 Cow Tower in Norwich is situated on a bend in the River Wensum and is one of the earliest examples of a medieval purpose-built artillery blockhouse. The tower was to defend a strategic north-eastern point in Norwich's city defences and was to house guns and a garrison of gunners to defend the approach to the city across the River Wensum from French forces and English rebels. The area is called Bishopsgate and the name Cow Tower was chosen as it stands in a water meadow which used to be called Cowholme.

It was maintained throughout the 15th century, and played a role in Kett's Rebellion of 1549, when the rebels attacked Norwich, deploying artillery and damaging the tower's parapets. Repairs to the tower's walls in the late 19th century inadvertently caused long-term damage, and in 1953 it was taken into the guardianship of the Ministry of Works, who stabilised its condition in a five-year conservation project. In the 21st century, Cow Tower is managed by English Heritage and Norwich City Council; the tower is now only a shell, however, as the floors and the roof of the building have been lost.

The circular tower is 11.2 metres (37 ft) across, 14.6 metres (48 ft) high and divided into three storeys. Its walls are 1.8 metres (5 ft 11 in) thick at the base, with a core of flint stone, faced on the inside and outside with brick; the archaeologist T. P. Smith considers it to feature some "of the finest medieval brickwork" in England. The walls have gunports for the smaller pieces of artillery and the roof would have supported the heavier bombards, with wide embrasures giving the weapons adequate firing space. The Cow Tower was specially designed to support the use of gunpowder artillery, making it a very rare structure in England for this period: the only close equivalents are God's House Tower in Southampton, and the West Gate at Canterbury.