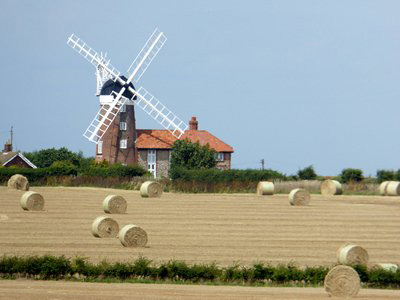 Along the North Norfolk Heritage Coast

The North Norfolk Heritage Coast is an Area of Outstanding Natural Beauty with a unique and varied coastline. The famous award-winning Blue Flag sandy beaches are unspoilt and very family-friendly, and the whole area is a haven for walking, birds and wildlife. With breath-taking countryside and landscapes the North Norfolk Heritage Coast is the perfect place for family holidays and more peaceful leisure breaks as there is something for everyone to enjoy.

Wells-next-the-sea is an ideal base for exploring this beautiful area. From here, a narrow gauge steam railway runs the 5 miles to Little Walsingham, a small village that has long been a centre of pilgrimage to the religious shrines in honour of the Virgin Mary as well as the ruins of two medieval monasteries. In 1061, according to the Walsingham legend, a Saxon noblewoman, Richeldis de Faverches, had a vision of the Virgin Mary in which she was instructed to build a replica of the house of the Holy Family in Nazareth in honour of the Annunciation.

The North Norfolk Coastal Path stretches from Hunstanton to Hopton-on-Sea near Caister and Great Yarmouth, and passes through much of North Norfolk's Area of Outstanding Natural Beauty with charming seaside towns and local villages. Of the many places of interest holiday travellers and walkers should take some time to explore Brancaster which has a popular sandy beach and is used for a range of different activities, Brancaster Staithe which was once a busy port with a malthouse that was said to be the largest in England, Burnham Deepdale and Burnham Overy Staithe, Wells-next-the-Sea, Morston Quay and Blakeney Point which is a rare habitat for valuable for unusual plants, insects and birds, Blakeney, Cley-next-the-sea, Weybourne, Sheringham, Beeston Regis, West Runton, Cromer, Overstrand, Trimingham, Mundesley, Happisburgh and Sea Palling.

Known as the birdwatching capital of Britain, this area is home to many famous nature reserves including the RSPB (Royal Society for the Protection of Birds) Titchwell Nature Reserve, Blakeney National Nature Reserve, Holkham Nature Reserve and the NWT Cley Marshes which is considered to be one of the best bird watching sites in the UK.

Weybourne Windmill is located on the eastern high ground above the village of Weybourne, it is on the northern side of the A149 coastal road that links Kings Lynn to Great Yarmouth. The Windmill was built in 1850 and consists of five storeys built from red brick. The mill had four double shuttered sails. When it was in operation the sails, which are now fixed in an easterly direction, powered three pairs of overdriven millstones, located on the second floor. The windmill ceased production in 1916 and fell into disrepair until it was extended and partially restored in the late 1920s. Weybourne Windmill, which is 3 miles west of Sheringham and within the Norfolk Coast Area of Outstanding Natural Beauty, is a grade II listed building.

Today is:
Copyright © 2017-2022 caistercaravan.co.uk. All rights reserved.
CaisterCaravan is not responsible for the content of external sites.
Designated trademarks, logos, brands and images are the copyright and/or property of their respective owners.
Great Yarmouth Tourist Office, Maritime House, 25 Marine Parade, Great Yarmouth NR30 2EN
www.great-yarmouth.co.uk
You are here:
Ref: 4968 11245