You are here: Home > Articles > Happisburgh 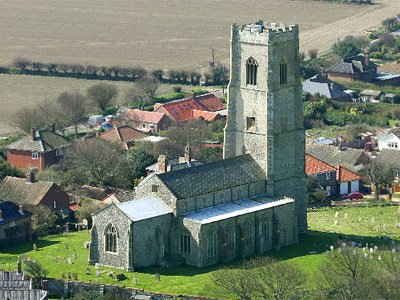 The Coastal Village of Happisburgh

Happisburgh is a pretty coastal village in north-east Norfolk about 5 miles from Stalham, 16 miles from Cromer and 18 miles from Caister-on-Sea. It has a fascinating history and became a site of national archaeological importance in 2010 when flint tools over 800,000 years old were unearthed. This is the oldest evidence of human occupation anywhere in the UK. In May 2013, a series of early human footprints were discovered on the secluded beach at the site, providing direct evidence of early human activity. Sadly, the sea has since washed them away.

Happisburgh, on the Norfolk Heritage Coast is a lovely place to visit and makes a perfect day-trip. Many of the attractive cottages in and around Happisburgh are built from flint and thatch, and the pretty lanes and paths are well kept. From the secluded beach, where old wooded sea defences still project from the waters, there are miles of coastal paths to walk and footpaths in the surrounding area. Thanks to the North Norfolk Pathfinder Project there's an award-winning car park here with a modern WC, an earth ramp leading to the sea, easy access to the lighthouse and village, and a play area for children and kids. This car park is at the end of Beach Road and is well signposted. It is also an excellent place to follow the Happisburgh Heritage Trail - a circular walk that takes you past landmarks and historic buildings in Happisburgh.

St Mary's Church in Happisburgh has a tall 110 ft. high tower like other villages along this coast which serve as an important landmark for mariners warning them of the treacherous nearby sandbanks. The present church dates from the 15th century and has a fine font and a well-preserved screen. In the church books is a curious memorandum, dated about the middle of the 18th century. The rector of that time, asking as to why so few children were baptised, discovered that it was customary on the occasion of a baptism for the child's parents to give a feast to their friends. Finding that many of his poor parishioners were unable to observe this custom, the rector provided a feast at his own expense, with the result that on Whit Sunday of the year 1741, over a hundred children were baptised.

In the churchyard was buried a notorious poisoner named Jonathan Hales. When, in 1846, his body was exhumed, it was found holding in the left hand a piece of cake and in the right a poker, this being in accordance with a wish he expressed when dying. More than a dozen persons are believed to have been the victims of this nefarious criminal, who poisoned even his own children with arsenic.

The red and white striped lighthouse to the south of the church is the only independently operated lighthouse in the UK and the oldest working lighthouse in East Anglia. It was constructed in 1790 and is still occasionally open to the public as it offers stunning views of the coast and countryside. The tower is 85ft tall and the lantern is 134ft above sea level.

Two King's ships were lost off this place. On December 19th, 1770, HMS Peggy drove ashore, and the bodies of thirty-two of the crew were buried in the churchyard. Over 100 sailors on HMS Invincible lost their lives in these treacherous waters in 1801 while on their way to join Nelson in Copenhagen. On February 7th, 1807, HMS Hunter was wrecked on the beach, and most of the crew were drowned.

Today is:
Copyright © 2017-2022 caistercaravan.co.uk. All rights reserved.
CaisterCaravan is not responsible for the content of external sites.
Designated trademarks, logos, brands and images are the copyright and/or property of their respective owners.
Great Yarmouth Tourist Office, Maritime House, 25 Marine Parade, Great Yarmouth NR30 2EN
www.great-yarmouth.co.uk
You are here:
Ref: 4983 11260