You are here: Home > Articles > Cromer 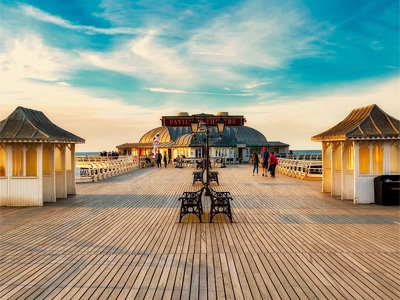 The Seaside Resort of Cromer

Cromer is the most delightful holiday resort and coastal town on the Norfolk Heritage Coast. Great Yarmouth is a larger town, and it's annual number of visitors is greater than that of Cromer, but Cromer possesses charms which none of its rivals can boast. Standing high, but sheltered by well wooded hills, with splendid sands, cliffs between 100 to 200 ft. high, prettier surroundings than any other Norfolk town, and innumerable places of interest within easy distance of it, its attractions are evident. Cromer grew up fast in the nineteenth century and it is still expanding. The motto "Gem of the Norfolk Coast" is highlighted on the town's road signs. Cromer became a resort in the early 19th century, with some of the rich Norwich banking families making it their summer home. Visitors included the future King Edward VII, who played golf here. The resort's facilities included the late-Victorian Cromer Pier, which is home to the Pavilion Theatre. In 1883 the London journalist Clement Scott went to Cromer and began to write about the area. He named the stretch of coastline, particularly the Overstrand and Sidestrand area, "Poppyland", and the combination of the railway and his writing in the national press brought many visitors. The name "Poppyland" referred to the numerous poppies which grew (and still grow) at the roadside and in the meadows.

The Cromer Parish Church of St Peter and St Paul is a beautiful building consisting of chancel, clerstoried nave of five bays, aisles, north and south porches, and an embattled west tower 150 ft. high. It has undergone much rennovation over the years. Tradition says that the chancel was used by Cromwell as a barracks and then destroyed. It was restored in 1887-9, under the direction of Sir A. W. Blomfield at a (then) cost of £6,800. The great height of the piers and arches is especially noticeable, and the font is a copy of a famous one in Yaxham church.

Among the many interesting places which can easily be visited from Cromer are Beeston Priory, Gunton Park, Overstrand Church, Felbrigg, Heydon Hall, Sidestrand, Mundesley, Trimingham, Sheringham, Wroxham and Blickling Hall. Tourism developed in the town during the Victorian period and is now an important part of the local economy. The town is a popular resort and acts as a touring base for the surrounding area. The coastal location means that beach holidays and fishing are important, with the beach and pier being major draws. The South American themed Amazona zoo park opened to the public in 2006 and is to the south of the town. The park covers 10 acres (40,000 m2) of former brick kilns and woodland on the outskirts of the town and includes animals such as jaguar and puma.

Today is:
Copyright © 2017-2022 caistercaravan.co.uk. All rights reserved.
CaisterCaravan is not responsible for the content of external sites.
Designated trademarks, logos, brands and images are the copyright and/or property of their respective owners.
Great Yarmouth Tourist Office, Maritime House, 25 Marine Parade, Great Yarmouth NR30 2EN
www.great-yarmouth.co.uk
You are here:
Ref: 4928 11205