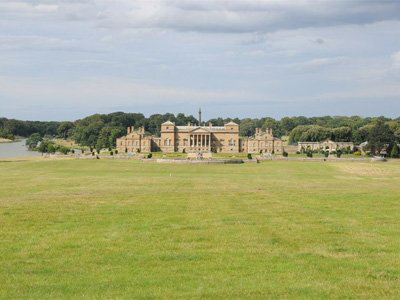 The lovely, small village of Holkham is perfect for family holidays, leisure trips and day-trips. Located on the North Norfolk Heritage Coast it is home to a stunning, award-winning sandy beach at Holkham Gap, nature reserves, marked scenic walks and nature trails to explore, and places to eat. Holkham benefits from a vast 25,000 acre estate with the magnificent Holkham Hall standing in a commanding position. The Hall, surrounded by beautiful rolling parkland with fallow and red deer, is an 18th-century Palladian stately home and is home to the Earl of Leicester and a grand collection of art treasures. The original inscription over the main entrance reads "This seat, on an open, barren estate, was planned, built, decorated and inhabited in the middle of the 18th century, by Thomas Coke, Earl of Leicester." Thomas Coke was known as "Coke of Norfolk", "the best game-shot of his day" and the "first farmer in England." The shooting records for the estate make fascinating reading as Holkham had long been famous for its abundant game. Just north of the Hall is the Leicester Monument, errected to "Coke of Norfolk" by public subscription. It is a Corinthian column, surmounted by a wheatsheaf. The park also has an obelisk 80 ft. high, errected in 1729, and a woodland play area for children.

Holkham's beautiful, picturesque and popular beach has recently won the Countryfile Magazine Beach of the Year award, has long white and golden sands backed by pine woods and sand dunes, and is rarely crowded. This beach, considered to be one of the best in England, is part of one of the largest and most diverse National Nature Reserves in the country with many rare species of flora and fauna. A scenic path with lovely views goes round the entire bay and the beach was made famous when it was filmed for the final scenes of the 1998 film "Shakespeare in Love". The village is very dog-friendly and well-behaved dogs are allowed on the beach and in the nearby woods providing they are kept under proper control. Dogs are also permitted in the grounds of Holkham Hall and the courtyard, but not in the house or walled garden.