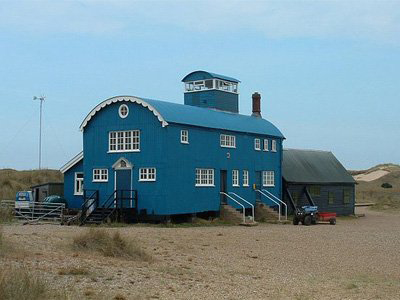 Blakeney is one of Norfolk's prettiest villages which was once an important commercial port, and stands on the border of the wide, wild-fowl haunted salt marshes and tidal mudflats of the North Norfolk Heritage Coast. It's been in the care of the National Trust since 1912 as Blakeney National Nature Reserve. This area has miles and miles of footpaths, including part of the North Norfolk Coastal Path, and spectacular, uninterrupted views of the beautiful coastline. It is a site of Special Scientific Interest and the area is part of an Area of Outstanding Natural Beauty.

Blakeney Point is a 4-mile spit of flint-derived shingle and sand dunes, and is an iconic landmark created by longshore drift across the River Glaven. It juts out into the sea on a north facing coast. It is part of the parish of Cley next the Sea and has a mixed colony of about 500 harbour and grey seals. The harbour seals have their young between June and August, and the pups, which can swim almost immediately, may be seen on the mud flats. Grey seals breed in winter, between November and January; their young cannot swim until they have lost their first white coat, so they are restricted to dry land for their first three or four weeks, and can be viewed on the beach during this period. Boat trips for a better view of the seals and birds leave from Morston Quay.

The church of St Nicholas in Blakeney is a fine church situated on a hill south of the village and is a conspicuous landmark. The slender tower of the chancel (which has a vaulted roof) is believed to have once been used as a beacon-chamber. The tower offers beautiful views of the surrounding area, and there are still some remains of the Carmelite monastery, which was founded in 1290, to be seen.

The ancient village of Blakeney, set on a small hill leading down to the harbour, and Blakeney Point are visited by thousands of tourists and visitors each year with a great number of them saying birdwatching was the main purpose of their visit. The National Trust allows dogs on Blakeney Point but there are restrictions between April and August and the winter months each year as to where they can be walked. The concern is for the wildlife and seal pupping. Blakeney village and the nature reserve are beautiful and peaceful places to visit.

As with many places in Norfolk, Blakeney has its own paranormal stories to tell. One of the best known is the legend of Black Shuck - an apparition of a terrifying demon dog. One legend has it that at the time of the Viking settlement in East Anglia and Norse mythology, the god Odin had a large black hound as a companion who was tragically lost. Another story tells that a cargo ship on its way to Blakeney was wrecked at Salthouse and all the crew drowned. Amongst the bodies, a large black dog was found next to his master. The dog, called Black Shuck, now haunts the north Norfolk coastal areas looking for his master.

The picturesque village of Blakeney was the third most important port in Norfolk when the Guildhall was built in the 15th century, yet few buildings survive from this prosperous period. The Guildhall’s flint and stone construction reflects its own importance and that of Blakeney itself. From a small price for a year's membership, English Heritage members enjoy unlimited access to over 400 historic properties across the country, a whole year’s worth of fun days out, free entry for up to six accompanying children per adult member, free or reduced-price entry to exclusive members’ events giving you access to our experts and a glimpse behind the scenes.

Today is:
Copyright © 2017-2022 caistercaravan.co.uk. All rights reserved.
CaisterCaravan is not responsible for the content of external sites.
Designated trademarks, logos, brands and images are the copyright and/or property of their respective owners.
Great Yarmouth Tourist Office, Maritime House, 25 Marine Parade, Great Yarmouth NR30 2EN
www.great-yarmouth.co.uk
You are here:
Ref: 4925 11202