Old Churches and Ruins in Norfolk

Norfolk is renowned for its great number of fine churches and places of worship, and Norwich alone has about sixty of them. The city has often been referred to as the 'City of Churches'. Many of the small Norfolk towns and vllages have churches whose size and architectural beauty are most impressive. The finest outside Norwich are at Great Yarmouth where the Church of Saint Nicholas was the largest parish church in England. Built from 1101, it is probably the oldest building in the town. 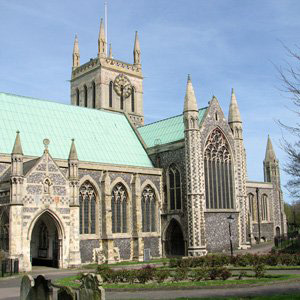 Other fine churches are located in Kings Lynn, Worstead, Castle Rising, Salle, Cawston, Walsoken, East Dereham, Swaffham and so many other places too numerous to list here. There are many round-towers, but they are not so fine as those in Suffolk, the most striking being that at Haddiscoe. Saxon work is believed to be traceable in the towers of the churches at Great Dunham, Great Ryburgh and Howe. Early English work is generally found in the churches of places that have been centres of commercial industry such as Norwich, Great Yarmouth and East Dereham. The font at the priory church at Binham (see Binham Priory is a fine example of the work of this period.

Decorated work can be seen in the aisles of Great Yarmouth parish church, the tower of the fine church at Worstead (once an important industry centre), in the main arcade at Aylsham, where the piers are alternately circular and octagonal, and in the chancel of St. Margaret's in Kings Lynn.

Most of the Norfolk churches of this period are perpendicular, the finest being those of St. Peter Mancroft at Norwich and St. Nicholas at Kings Lynn. Northwold church contains a fine Perpendicular Easter sepulchre, and Walsoken and Castle Acre have fine perpendicular fonts. The finest ruin of a monastic house in Norfolk is undoubtedly that of Castle Acre Priory. At Binham are the nave and ruined chancel and transepts of a Benedictine priory founded by Peter de Valoines at the end of the eleventh century.

Reference, Resources and further Reading
Norfolk by William A Dutt. First published in 1901.