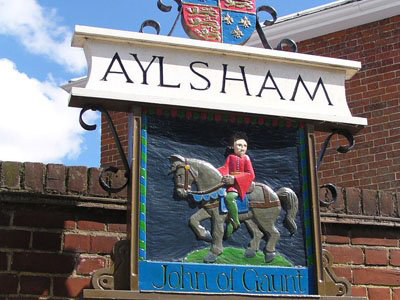 Aylsham is an attractive, traditional Norfolk market town situated beside the River Bure between the cathedral city of Norwich and Cromer. The town is an ideal base to explore this lovely part of Norfolk and is close to The Norfolk Broads, the North Norfolk Hertage Coast, and some large country estates and grand country houses. The National Trust properties of Blickling Hall, a stately Jacobean mansion with over 400 years of fascinating history, beautiful gardens and over 4,800 acres of parkland and countryside, and Felbrigg Hall, a 17th-century country house noted for its fine Jacobean architecture, stylish Georgian interior and fine views over the open Norfolk landscape are both great attractions and perfect for an enjoyable day out. Aylsham is the northern terminus of the Bure Valley Railway, a 15 inch minimum gauge heritage railway which runs from Aylsham to Wroxham and is Norfolk's longest. The station also marks the start of the Bure Valley Walk, a walking and cycling route alongside the railway line. This historic town is dominated by an attractive market place owned by the National Trust, and the huge 14th century church of St Michael and All Angels with a tower that stands 30 metres high plus a small spire which can be seen for miles around. It has been claimed that the church was funded by John of Gaunt, lord of the manor from 1372. Aylsham has beautiful architecture and many streets and lanes with 18th century half-timbered houses and buildings. The street plan has changed little since medieval times.

Aylsham has an interesting history and is believed to have been founded around 500 AD by Anglo Saxon settlers and is also mentioned in the Domesday Book of 1086. It was an important textile town in the middle ages and renowned for its linen. The'cloth of Aylsham' was supplied to the royal palaces of Edward II and Edward III. It later went on to become a major wool and textile producing area. The famous 17th century building and one of the oldest surviving in Aylsham, the Black Boys Inn, in the market place has had many famous guests over the years including Lord Nelson who was said to have danced in an adjoining room. The great landscape designer of the 18th century, Humphrey Repton, is buried in the churchyard.

Things to see and do in Aylsham include a trip on the Bure Valley Railway, a free visit to the Redwings Horse Sanctuary which is the largest of its kind in the UK and cares for ponies, mules, donkeys and horses that have suffered from maltreatment, neglect or poor circumstance, and a free visit to Aylsham Heritage Centre which is dedicated to the history of this fascinating market town.

Today is:
Copyright © 2017-2022 caistercaravan.co.uk. All rights reserved.
CaisterCaravan is not responsible for the content of external sites.
Designated trademarks, logos, brands and images are the copyright and/or property of their respective owners.
Great Yarmouth Tourist Office, Maritime House, 25 Marine Parade, Great Yarmouth NR30 2EN
www.great-yarmouth.co.uk
You are here:
Ref: 3548 3214