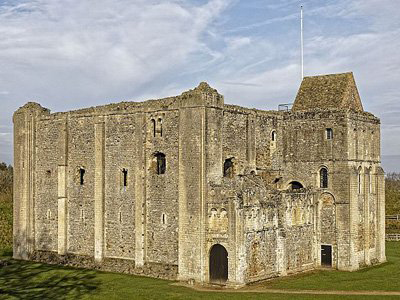 Castle Rising is a castle of national importance and one of the most famous and well-preserved 12th century buildings in England. Situated near the village of Castle Rising in Norfolk, it is surrounded by 20 acres of massive Norman earthworks and a deer park which merged into the larger Rising Chase with boundaries stretching beyond the horizon when viewed from the keep. The castle was built from 1138 by William d'Aubigny, 1st Earl of Lincoln and 1st Earl of Arundel, with the mighty square keep the first part to be errected. Alterations to fireplaces and entrances were soon carried out after completion. Castle Rising passed into the hands of the prominent baronial de Montalt family in 1243 who later sold it to Queen Isabella - a wealthy woman and the wife of King Edward II - who extended the castle buildings and enjoyed a lavish lifestyle. Following Edward's planned murder in 1327 by Queen Isabella and her lover Roger Mortimer, who both controlled the government of England, King Edward III had Mortimer tried and hanged for treason in 1330 and his mother, Queen Isabella, banished from court. She was to spend the last 30 years or so of her life at Castle Rising becoming a nun of the Poor Clares in her old age. Isabella died in 1358 after spending many of her last years locked up in the castle after becoming insane.

The ghost of Queen Isabella is now reported to haunt the upper floors of Castle Rising and visitors say that she can still be heard either screaming or laughing hysterically all around the castle and throughout the grounds.

When Castle Rising was first built in the 12th century it was said to be easily accessible from the sea, and even in the 18th century paintings of the castle showed ships in the background. However, this is disputed by some historians. English Heritage took over control of the castle in 1983 and continued to operate it as a tourist attraction. In the 21st century the castle is protected by UK law as an ancient monument and a grade I listed building. It remains in the custody of English Heritage, but since 1998 has been managed by its owner, Baron Howard of Rising.

Today is:
Copyright © 2017-2022 caistercaravan.co.uk. All rights reserved.
CaisterCaravan is not responsible for the content of external sites.
Designated trademarks, logos, brands and images are the copyright and/or property of their respective owners.
Great Yarmouth Tourist Office, Maritime House, 25 Marine Parade, Great Yarmouth NR30 2EN
www.great-yarmouth.co.uk
You are here:
Ref: 4950 11227