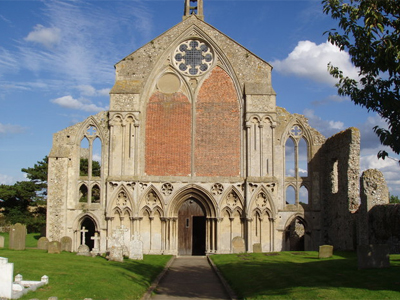 The Ruins of Binham Priory

St Mary's Priory, Binham, also known as Binham Priory, is a ruined Benedictine monastery located in the Norfolk village of Binham. It is considered to be one of the most complete and impressive monastic ruins in Norfolk. The priory was founded in the late 11th century by the Norman baron Peter de Valognes who was a nephew of William the Conqueror. After the Norman Conquest, Peter and his wife were given large swathes of land in northern and eastern Norfolk which included the village of Binham. The priory was a dependent house of St. Albans Abbey. The nave of the priory church, with its splendid 13th century west front and fine tiers of Norman arches, was much larger than the priory. It is now known as St. Mary and the Holy Cross and is still in use for worship today. The monastery was closed in 1539 as part of the Suppression of the Monasteries under King Henry VIII and given to Sir Thomas Paston who was a local man and a loyal royal servant. He demolished most of the buildings in order to build a new house. Stone from the priory was sold and reused in many local houses. The remains are now in the care of English Heritage.

Tunnels are said to have run between the priory and the church and one to an unknown destination which is said to be haunted by a local fiddler called Jimmy Griggs. After some of the tunnels partially collapsed during a violent storm, Jimmy Griggs went to investigate the damage with his pet dog. Hours later, only the dog was to emerge safely. When Griggs was inside the tunnels had completely collapsed. After all this time, haunting music is said to be still heard coming from the collapsed tunnels. There have also been several reports of ghostly monks walking through the tunnels connecting the priory with the holy shrine in Walsingham.

Binham Priory is among the most complete and impressive monastic ruins in Norfolk. This Benedictine priory was founded in 1091 by Peter des Valoines, a nephew of William the Conqueror. Many of its priors were unscrupulous and the history of the priory is one of almost continuous scandal. From a small price for a year's membership, English Heritage members enjoy unlimited access to over 400 historic properties across the country, a whole year’s worth of fun days out, free entry for up to six accompanying children per adult member, free or reduced-price entry to exclusive members’ events giving you access to our experts and a glimpse behind the scenes.

Today is:
Copyright © 2017-2022 caistercaravan.co.uk. All rights reserved.
CaisterCaravan is not responsible for the content of external sites.
Designated trademarks, logos, brands and images are the copyright and/or property of their respective owners.
Great Yarmouth Tourist Office, Maritime House, 25 Marine Parade, Great Yarmouth NR30 2EN
www.great-yarmouth.co.uk
You are here:
Ref: 4901 11178