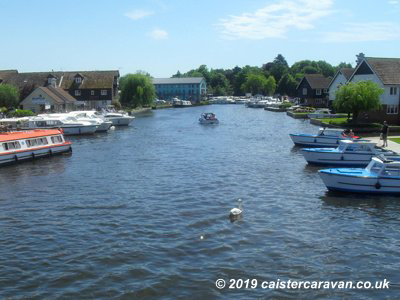 The River Bure at Wroxham

Wroxham on The Norfolk Broads

Wroxham is a delightful village situated at the heart of the Norfolk Broads on the southern side of the River Bure and is almost twinned with the village of Hoveton on the northern side of the river. Both villages have several boatyards and pleasure craft hire yards as well as some shops and local industry. One of the most popular and the oldest shops is Roys of Wroxham which has been situated near Wroxham Bridge since 1899. Roys is now known as the world's largest village store and sells a huge range of toys, clothing, garden equipment, homeware, books and electrical goods. There is even a supermarket and a McDonalds restaurant within the store. Surrounded by beautiful Norfolk countryside and often known as the 'Capital of the Broads', Wroxham is a favourite destination for holidaymakers, boating enthusiasts, excursions and wildlife watchers. It was one of the earliest boating centres on the Broads. Wroxham has a charming old medieval brick and stone bridge over the River Bure which was reconstructed in 1619 and is not the easiest to navigate with some modern Broads cruisers but help is available locally at a small cost from a pilot station on the Hoveton side.

Wroxham Broad is about one mile downstream from Wroxham Bridge and covers an area of nearly 35 hectacres. It is a relatively shallow broad with a mean depth of under 1.5 metres and is a favourite for sailing as it is the home of the Norfolk Broads Yacht Club. Two channels connect Wroxham Broad to the River Bure and the whole area is home to abudant wildlife and wild flowers.

The historic Church of St Mary is grade 1 listed and is away from the busy area near the bridge. It stands at the top of a steep slope overlooking the River Bure. Like many Norfolk churches it was built of flint and limestone and has lead roofs. The area around the church was once the centre of the village. Nearby is the popular Hoveton Hall Gardens with about 15 acres of beautiful formal and informal gardens.

Back to Norfolk Broads Index