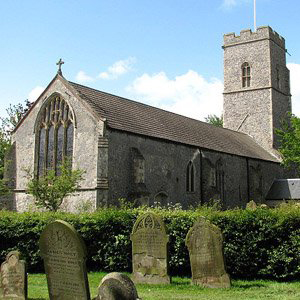 The Holy Trinity Church in Caister-on-Sea, Norfolk was originally built in the 14th century and later re-built from the 18th century. It was finally finished in 1894. Some of the most impressive features inside the church include the ornate and richly-carved large medieval font that was brought in from Suffolk by the Victorians in 1902, and the incredible stained glass windows. The oldest window in the church is a lancet dating from the 13th century. The east window is a memorial to the nine courageous lifeboatmen who drowned when the lifeboat 'Beauchamp' capsized whilst responding to a distress call offshore in 1901. This window shows the calling of Peter, James, John and Andrew to be 'fishers of men', and St. Edmund, the King of East Anglia, together with St, Nicholas, the patron saint of sailors and fishermen. There are a number of other memorials inside Holy Trinity Church on the chancel and sanctuary walls, the best-known perhaps being that of William Crowe who was a London merchant who purchased Caister Castle from the Paston family. There is also a black marble monument to his descendant Robert Crowe who died in 1727. The church is usually open each day and is situated just to the east of the ruins of Caister Roman Fort. Holy Trinity Church is generally still in good repair with the only area of concern now being the roof of the sacristy.

The churchyard contains the grave of Sarah Martin who died in 1843. She was a dedicated activist for prison reform just like Elizabeth Fry. Sarah spent a lot of time working with inmates of the Tolhouse Gaol teaching and leading religious services and is remembered by a memorial at St. Nicholas Church in Great Yarmouth, and her name is inscribed on the Reformers Monument at Kensal Green Cemetery, London. Opposite the Holy Trinity churchyard, which is now closed for burials, is the main cemetery in Caister along the Ormesby Road with a large white stome memorial to the men who died in the Caister Lifeboat disaster of 1901.

Today is:
Copyright © 2017-2022 caistercaravan.co.uk. All rights reserved.
CaisterCaravan is not responsible for the content of external sites.
Designated trademarks, logos, brands and images are the copyright and/or property of their respective owners.
Great Yarmouth Tourist Office, Maritime House, 25 Marine Parade, Great Yarmouth NR30 2EN
www.great-yarmouth.co.uk
You are here:
Ref: 4927 11204