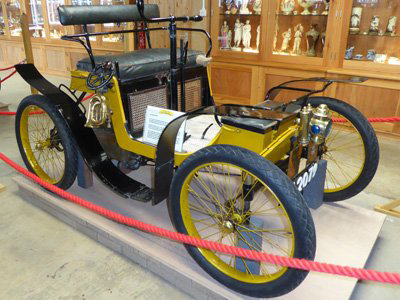 The Caister Castle Car Collection at Caister Castle Car Museum is believed to be the largest collection of privately owned motor vehicles in the country. The collection contains more than 120 cars and over 100 bikes which range from the first real car in the world - an 1893 Panhard et Levassor - to a customised 1990's Harley Davidson motorcycle. The museum proudly displays fine and rare veteran, vintage, classic and sports cars including British Formula One racing driver and world champion Jim Clark's Lotus, a Cadillac once owned by Christine Keeler, a pair of Rolls Royce two seat racing cars built for the film Chitty Chitty Bang Bang, and the BRM driven by Sir Jackie Stewart. There is also the very first Ford Fiesta that came off the production line. The collection is complimented by displays of touring automobiles, bicycles, motorcycles, horse-drawn vehicles, baby carriages, pedal cars and other related items.

The Caister Car Collection is housed in a purpose built museum in the grounds of the 15th century Caister Castle. The castle, a picturesque moated ruin and one of the earliest buildings in England to be built of brick, was built by Sir John Fastolf in about 1432 and has an intact ninety foot tower which can be climbed by the internal stairs for magnificent views of the ruins and the surrounding area. Formerly it surounded a quadrangle. the great hall being on the west side. The south and east sides are gone. The Caister Car Collection is just off the A1064 and is easy to find by following the brown tourist signs seen throughout the area.

Today is:
Copyright © 2017-2022 caistercaravan.co.uk. All rights reserved.
CaisterCaravan is not responsible for the content of external sites.
Designated trademarks, logos, brands and images are the copyright and/or property of their respective owners.
Great Yarmouth Tourist Office, Maritime House, 25 Marine Parade, Great Yarmouth NR30 2EN
www.great-yarmouth.co.uk
You are here:
Ref: 4956 11233