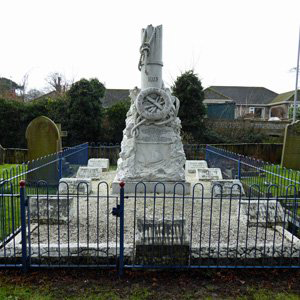 The Caister Lifeboat disaster happened on the night of 13 November 1901 when nine crew members lost their lives while attempting to launch the lifeboat 'Beauchamp' in a brave rescue attempt when a vessel was in trouble on the Barber Sands. The weather that night was extremely poor with lashing rain and a strong gale blowing the heavy sea.

When the Beauchamp was finally launched in the early hours of the morning the crew headed towards the stricken vessel but the sea conditions were so rough the boat was forced back towards the beach. As the Beauchamp neared the beach she struck the beach bow first. At the same time the heavy sea struck the starboard (right) side and the lifeboat capsized. The masts broke off and the crew became trapped beneath the boat.

A retired assistant coxwain, James Haylett (Senior), was alerted to the incident by his grandson Frederick Henry Haylett who was part of the launching crew earlier. Both men ran towards the upside-down Beauchamp and could hear the cries of the trapped men underneath. They then managed to pull out three of the crew, Walter Haylett, Charles Knights and John Hubbard. These three men were the only survivors. Nine Beauchamp crew members were lost in the disaster - Aaron Walter Haylett, James Haylett (Junior), William Brown, William Wilson, Charles Brown, John Smith, George King, Charles George and Harry Knights.

Seventy-eight years old retired coxwain James Haylett was asked at the subsequent inquest if knew why the crew persisted in the rescue attempt despite the poor weather and sea conditions. He replied that the Caister Lifeboat crew would never give up a ship in distress. This reply was to become the famous phrase "Caister men never turn back". The shorter phrase "Never turn back" was later adopted by the R.N.L.I. as their motto. Today there is a pub designed by AW Ecclestone and built in 1956 called the Never Turn Back. It is in Manor Road, Caister and is a memorial to the nine lifeboatsmen who died in the disaster.

The crew who lost their lives in the tragic incident are all buried in Caister Cemetery opposite the Holy Trinity Church, and a monument was completed in 1903 in remembrance of them - see the main image on this page.

In 2020, this memorial of the Beauchamp and crew with a broken mast, anchor, lifebuoy and laurel wreaths became protected by Historic England with Grade II listed status.

CaisterCaravan offer a fully equipped, deluxe 3 bedroom (8 berth) static caravan at Haven's Caister-on-Sea Holiday Park in Norfolk for family holidays, staycations and short breaks. Situated in a quieter area away from the main holiday park entrance, this comfortable caravan is just a one minute stroll from the wide, sandy beach. Caister Holiday Park has all the activities and facilities you would expect from one of Britain's largest and oldest holiday parks. Book this caravan cheaply through 2cHolidays with their easy-to-use, safe and secure booking system.

Today is:
Copyright © 2017-2022 caistercaravan.co.uk. All rights reserved.
CaisterCaravan is not responsible for the content of external sites.
Designated trademarks, logos, brands and images are the copyright and/or property of their respective owners.
Great Yarmouth Tourist Office, Maritime House, 25 Marine Parade, Great Yarmouth NR30 2EN
www.great-yarmouth.co.uk
You are here:
Ref: 4913 11190