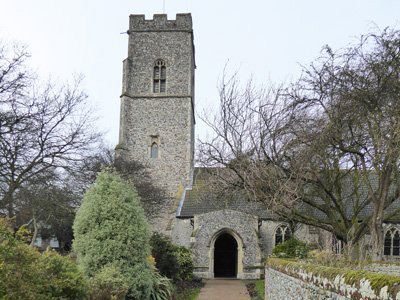 There once were over 1,000 medieval churches in Norfolk. Of these 659 still remain. Norfolk has more medieval churches than any other county in Britain, and the greatest concentration in the world. Not only are these churches internationally important buildings but they contain hundreds of medieval works of art and craftsmanship and many are noted for their beautiful rood screens, decorated roofs, stained glass windows and bench carvings. 63 churches are believed to once have stood in Norwich alone. Of these there are 32 still in existence but only eight are presently used as parish churches. 18 are in the care of the Norwich Historic Churches Trust, three are looked after by the Churches Conservation Trust and one is privately owned.

The decline in the population of Norfolk left a number of churches isolated from their villages, but their towers still dominate the Norfolk landscape. 130 of the 185 surviving examples of round tower churches in the country can also be found in Norfolk, predominantly built of knapped flint, in areas lacking normal building stone.

Churches are often located on pre-Christian sites of worship and they are almost always oriented so that the main altar faces Jerusalem, i.e. is situated on the east end, with the layout of graves in adjoining churchyards following suit.

The medieval church dominated everybody's life: peasant farmers worked for free on church land and paid 10 percent of their earnings, either in money or in goods produced, to the church in return. The parishioners were responsible for the upkeep of the nave, which was their domain, whereas the chancel belonged to and was the responsibility of the priest. This explains why a number of churches have a chancel built of carefully squared stone and a nave constructed with locally available and cheaper flint.

Despite many changes effected during the Reformation, resulting in redundancies and ruination but often followed by extensive repair and restoration work several centuries later, these churches still house a number of medieval survivals. Many are kept open and offer information detailing their history and architectural features.

Today is:
Copyright © 2017-2022 caistercaravan.co.uk. All rights reserved.
CaisterCaravan is not responsible for the content of external sites.
Designated trademarks, logos, brands and images are the copyright and/or property of their respective owners.
Great Yarmouth Tourist Office, Maritime House, 25 Marine Parade, Great Yarmouth NR30 2EN
www.great-yarmouth.co.uk
You are here:
Ref: 4910 11187