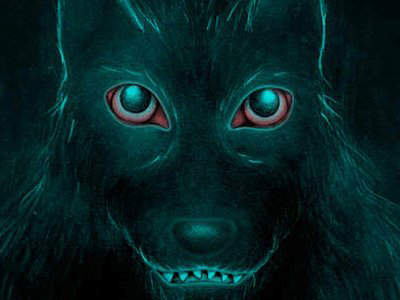 Black Shuck, the Legend of a Demon Dog

Black Shuck is an alleged apparition of a large black dog-like creature who is said to prowl the coastal areas and countryside of Norfolk, Suffolk, Cambridgeshire and Essex, particularly country lanes, footpaths, churches and churchyards, as well as occasionally further inland during darkness. Some people who say they have seen it refer to it as an unpleasant terrifying hellhound and not something you would wish to meet. Others say it is generally harmless and has even helped and guided lost travellers and acted as a protector to lone women. Black Shuck, the name Shuck is derived from the old English word 'scucca' meaning demon, is described as a big black shaggy dog with bared teeth and huge burning red eyes, and often seems to be searching for something before suddenly disappearing. The ghostly legend of Black Shuck goes back to the time of the Viking settlement in East Anglia and Norse mythology as the god Odin had a large black hound as a companion.

The most well-known reports of Black Shuck sightings and experiences happened in two Suffolk churches in August 1577 during a terrible storm. With a large congregation at prayer in Holy Trinity Church, Blythburgh the spectral hound is said to have burst through the doors and ran up the main aisle towards the nave and killed a man and a boy. The church steeple was said to have collapsed when this happened. On the way out of the church Black Shuck left scratch and burn marks on the north door (known locally as the devil's fingerprints) which can still be seen today. The second encounter was in St Mary's Church, Bungay when the hound again run quickly up the main aisle and killed two people who were kneeling at prayer. It continued attacking many of the congregation with its cruel teeth and claws. The hound was immediately considered to be an apparition of the devil. Black Shuck, who has stalked Norfolk and the surrounding areas for hundreds of years, was said to have been as big as a calf and to have eyes as big as saucers.

In 1890 a young Norfolk boy told of being chased into the North Sea and forced to swim away from the shore to escape a huge black hound that was chasing him. Later sightings include a Suffolk man who said he'd seen the dog one evening on the marshes near Felixstowe, and a midwife from Essex who had been cycling home after a delivery during the 1930's claimed she was followed by the creature through the lanes near Tolleshunt D'arcy. She added that the dog was huge and no matter how fast she pedalled it seemed to effortlessly keep up with her. The apparition, which remained silent throughout, then suddenly vanished. A woman in the 1950's said that she saw the huge hound near Cromer in Norfolk who left tracks leading from Mill Lane to Cromer Hall. In 1970 a huge hound was seen pounding over the beach at Great Yarmouth, and in 1972 a coastguard at Gorleston reported seeing a large black spectral hound on the beach in the dark early hours of the morning. The dog kept running and stopping then disappeared.

The legend of Black Shuck says that to look into the eyes of the apparition during an encounter is fatal and that death in the family will surely follow within a year.

The title page of the account of Abraham Fleming's report of the appearance of the ghostly black dog "Black Shuck" at the church of Bungay, Suffolk in 1577 reads: "A straunge, and terrible wunder wrought very late in the parish church of Bongay: a town of no great distance from the citie of Norwich, namely the fourth of this August, in ye yeere of our Lord 1577. In a great tempest of violent raine, lightning, and thunder, the like wherof hath been seldome seene. With the appeerance of an horrible shaped thing, sensibly perceiued of the people then and there assembled. Drawen into a plain method according to the written copye. by Abraham Fleming" Abraham Fleming was an English clergyman and translator, and born circa 1552. He died in 1607.

Other historic reports say that Black Shuck has been seen with just one eye. W. A. Dutt, in his 1901 Highways & Byways in East Anglia describes the creature thus: He takes the form of a huge black dog, and prowls along dark lanes and lonesome field footpaths, where, although his howling makes the hearer's blood run cold, his footfalls make no sound. You may know him at once, should you see him, by his fiery eye; he has but one, and that, like the Cyclops', is in the middle of his head. But such an encounter might bring you the worst of luck: it is even said that to meet him is to be warned that your death will occur before the end of the year. So you will do well to shut your eyes if you hear him howling; shut them even if you are uncertain whether it is the dog fiend or the voice of the wind you hear. Should you never set eyes on our Norfolk 'Snarleyow' you may perhaps doubt his existence, and, like other learned folks, tell us that his story is nothing but the old Scandinavian myth of the black hound of Odin, brought to us by the Vikings who long ago settled down on the Norfolk coast. There have been sightings of Black Shuck in Cromer, Blakeney, Sheringham, West Runton, and Overstrand as well.

Norfolk by William A Dutt. First published in 1902.
Wikipedia | Licence

Today is:
Copyright © 2017-2022 caistercaravan.co.uk. All rights reserved.
CaisterCaravan is not responsible for the content of external sites.
Designated trademarks, logos, brands and images are the copyright and/or property of their respective owners.
Great Yarmouth Tourist Office, Maritime House, 25 Marine Parade, Great Yarmouth NR30 2EN
www.great-yarmouth.co.uk
You are here:
Ref: 4988 11265