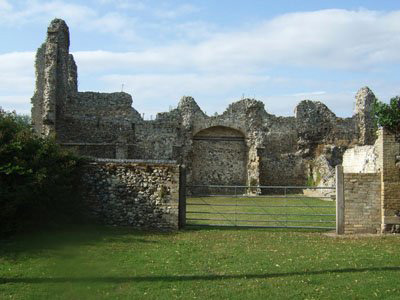 Thetford Priory (the Priory of Our Lady of Thetford) was founded in early 12th century and was one of the most important and richest monasteries in medieval East Anglia. It was affiliated to the great Benedictine Abbey at Cluny in France and built for the Cluniac order of monks in Norfolk. It was also the burial place for the earls and dukes of Norfolk for 400 years. Its vast wealth was due to the miraculous appearance of the Virgin Mary, whose statue at the Priory was found to contain relics of saints. It instantly became a popular place of pilgrimage. In 1540, Thetford Priory was suppressed during King Henry VIII's Reformation and most of the priory's buildings quickly fell in to disrepair.

Now in the care of English Heritage, the extensive surviving remains include the lower walls of the church and cloister, together with the almost complete 14th century gatehouse. The original buildings were arranged in a typical monastic layout with most being accessed from the central cloister by covered walkways on each side. Thetford Priory's other buildings such as the prior's lodgings - of which an impressive shell remains today, infirmary, stables and barns were erected outside the central area. Everything was enclosed by a wall and entered through the gatehouse.

The priory church was a large and elaborate building. Its proportions and detailing are similar to those of Castle Acre Priory, another Cluniac monastery founded in Norfolk in the same period. Between 1507 and 1510 a mason called Thomas Aldrych reconstructed the gable behind the high altar with a great window. Before the high altar lay the tombs of many patrons of the priory. In 1540 some were moved to Framlingham, where they can still be seen.

Like a lot of old historical buildings and ruins in Norfolk, the ruins of Thetford Priory are said to be haunted. There have been reports of disembodied voices being heard of monks chanting and singing occasionally. Recently, in 1992, a group of young people who were exploring the Thetford Priory remains heard what sounded like the noise of jangling keys coming from behind when no one else was following them. On turning round to see what was causing this strange sound they were startled to see the apparition of a hooded monk running past them. Earlier reports from the 1930's also involve strange apparitions of monks on the site.

Today is:
Copyright © 2017-2022 caistercaravan.co.uk. All rights reserved.
CaisterCaravan is not responsible for the content of external sites.
Designated trademarks, logos, brands and images are the copyright and/or property of their respective owners.
Great Yarmouth Tourist Office, Maritime House, 25 Marine Parade, Great Yarmouth NR30 2EN
www.great-yarmouth.co.uk
You are here:
Ref: 4989 11266