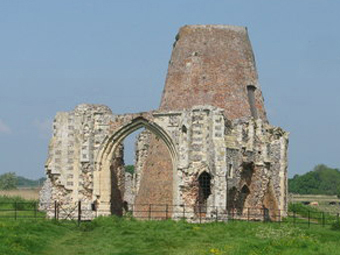 St Benet's Abbey was a medieval monastery in its day but only scant ruins of the gatehouse, lower walls of the sanctuary and some earthworks are visible today. The abbey was situated in a commanding position on a sand and gravel island beside the River Bure which is one of the major rivers of the Norfolk Broads. The land is now owned and managed by Norfolk Archaeological Trust who permit free access to view the ruins and site. By far, the easiest way to visit the abbey ruins is by boat as there are moorings along the bank of the River Bure to the west. Travel by car is possible but involves a short local walk - see the A.Hume Website for more information, details and helpful advice.

It was the first abbot of St Benet's Abbey, Elsinus, who procured stone to replace the original wooden structure of the abbey's church. This must have been a notable operation since suitable stone does not occur in the vicinity. The work was completed by the second abbot, Thurstan, who when he died in 1064 is reported to have been buried before the altar in the chapel of St Michael within the abbey church.

The site of St Benet's Abbey was occasionally affected by natural disasters and during the 13th and 14th centuries violent storms on the coast caused damage to the abbey after breaking through the sand dunes. The abbey was subsequently enclosed by battlements and only slight traces of these remain today. One of the abbey's great benefactors was Sir John Fastolf and was buried here after he died at Caister in 1459.

In the days shortly after the Norman Conquest a monk named Essric betrayed his fellow monks to the Normans. He wanted to be made Abbot so he made the soldiers promise to appoint him Abbot if he let them inside the Abbey to take it over. This they did and Essric was treated as he wanted to be for just a very short time. The Normans had no time for traitors so they nailed him to the abbey doors in the gateway and skinned him alive. Many times over the centuries since then it has been reported that his apparition has been seen, and his fateful screams heard, in the ruined gateway during dark nights particularly in winter. To anyone who hears and sees the apparition writhing in agony it is said to be a fateful omen.

It is also said that buried beneath the ruins of St. Benet's Abbey there are deep, long-lost vaults containing the remains of a dragon.

Today is:
Copyright © 2017-2022 caistercaravan.co.uk. All rights reserved.
CaisterCaravan is not responsible for the content of external sites.
Designated trademarks, logos, brands and images are the copyright and/or property of their respective owners.
Great Yarmouth Tourist Office, Maritime House, 25 Marine Parade, Great Yarmouth NR30 2EN
www.great-yarmouth.co.uk
You are here:
Ref: 3486 3152