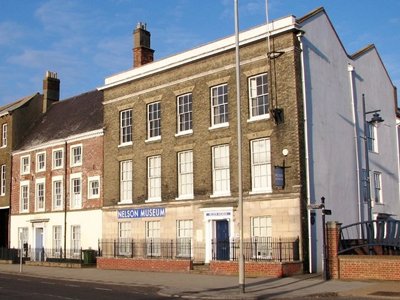 The Nelson Museum in Great Yarmouth, Norfolk is the only museum dedicated to the life and career of Lord Hoaratio Nelson. The museum has so much to see and discover, and you can explore Nelson's childhood and early life in Norfolk, his Naval career and famous battles, and his terrible wounds, illnesses and heoric and tragic death. The Nelson Museum has various exhibitions throughout the opening season where you can learn about his mesmerising personality and the women he fell in love with.

The Nelson Museum has over 2,000 items on show including original letters by Nelson, important papers and documents written by Naval officers and family during his time. There are also original miniature portraits of Nelson, portrait prints, broadsheets, maps, charts, plans, engravings and illustrations. The museum's library contains a huge collection of books, journals, pamphlets, notes and information relating to the life and times of Nelson and his contemporaries. The museum has excellent visitor facilities including a lovely picnic area in the Maritime Courtyard, a Gallery tea room where you can relax with delicious coffee, tea and snacks, a 'Below Decks' interactive experience, an outdoor Maritime Play Area, shop, disabled facilities and toilets. There is a pay and display car park located next door to the museum.

Horatio Nelson (1758-1805) was born on September 29, 1758 at Burnham Thorpe, Norfolk where his father Edmund Nelson was the rector. Horatio joined the Navy when he was 12 years old and by the time he was 18 had served in the West and East Indies, and in the Arctic. At 19 he passed examinations for the Naval rank of lieutenant and soon after was made captain of a small vessel 'Badger' and the larger 'Hinchingbrook' in the West Indies. Nelson's first big command was when took over the 'Agamemnon' just before the war with France began. He sailed her to join the British fleet in the Mediterranean where he helped to seize the island of Corsica. It was here that the suffered a wound in his right eye.

In 1797, at the great battle at Cape St. Vincent, it was largely his skill and bravery that made victory certain. At an attempt to take the town of Santa Cruz de Tenerife in the Canary Islands later that year he was shot in the right elbow and the arm had to be amputated quickly. After this he was sent home. He was later recalled and chosen to command a squadron to discover Napoleon's intentions with the French fleet in the Mediterranean. He eventually found them in Aboukir Bay near Alexandria in Egypt and attacked immediately winning a great victory now known as the Battle of the Nile. Horatio Nelson was now one of the most distinguished officers in the Navy.