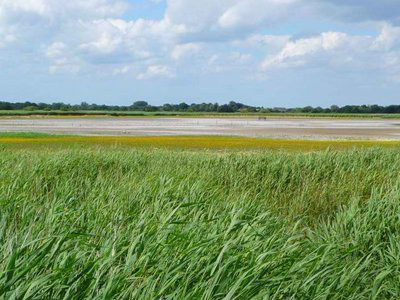 Hickling Broad near Potter Heigham in Norfolk is managed by the Norfolk Wildlife Trust and has the largest water surface area in the Norfolk Broads. It is not very deep and the deepest navigation channel has a depth of about 1.5 metres. During the First World War it was used as a reserve station for sea planes if the nearby sea was considered too rough. Nowadays, the picturesque Hickling Broad is hugely popular with holidaymakers and visitors enjoying sailing and boating holidays, and the abundant wildlife.

Like many areas in Norfolk, Hickling Broad is associated with a ghostly tale and reported hauntings. Local folklore tells a story that during the winter of 1815 a poor local Drummer Boy from Potter Heigham came home on leave from the army just before the Battle of Waterloo and fell deeply in love with a girl from the local village. The girl's father, who was a wealthy and influential man, refused to consent to their relationship and marriage as he did not want a soldier as a son-in-law. The couple continued to see each other in secret by meeting every night at a little hut at Swim Coots on the southern edge of Hickling Broad. During the winter, when the Broad was frozen over, the Drummer Boy would skate over the ice in his yellow coat with scarlet trim and signal his imminent arrival to his love by beating a tattoo on his kettle drum.

One cold February night in 1815 the girl waited in the hut as usual listening to the approaching drumming beat then everything suddenly went eerily quiet. The Drummer Boy was skating across the cold, misty Broad when the ice cracked and he plunged into the icy cold water of Hickling Broad and drowned. Since then it is said that on some dark and cold winter nights during the month of February, usually about 7pm in the evening, the ghostly sound of a rhythmic drum tattoo and the swishing sound of skates can be heard coming across the Broad as the shivering apparition of the phantom drummer boy continues his eternal search for the girl he loved and lost all those years ago.

It was later said that his sweetheart had one last glimpse of him before he vanished. When she rushed to the edge of the frozen Hickling Broad after failing to hear the usual drum tattoo she was heartened to see the cold and shivering boy skating towards her. She eagerly held out her hands to help him to shore. But as the pair touched hands, she felt only icy water and, as she looked down to see why her hands were so cold, the Drummer Boy disappeared. Then, there was only a pool of icy water on the ground! The next day the Wherrymen of Potter Heigham pulled out a body that had drifted to the side of the Broad. The young body was dressed in a yellow coat with scarlet trim. There was no need to ask who he was.

This story was re-told in 1890 by the author Ernest Suffling in his book History and Legends of the Broads District. It contains more information and details of what was said to have happened after the two young lovers had become accustomed to meet easily and in secret at Swim Coots. It is a story that warms even the coldest of hearts.

Today is:
Copyright © 2017-2022 caistercaravan.co.uk. All rights reserved.
CaisterCaravan is not responsible for the content of external sites.
Designated trademarks, logos, brands and images are the copyright and/or property of their respective owners.
Great Yarmouth Tourist Office, Maritime House, 25 Marine Parade, Great Yarmouth NR30 2EN
www.great-yarmouth.co.uk
You are here:
Ref: 4938 11215