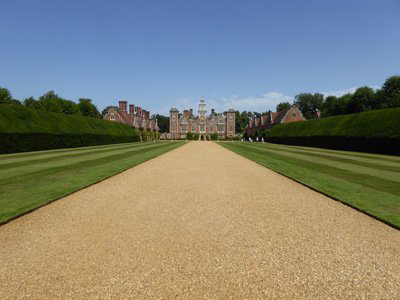 Blickling Hall is a stately Jacobean mansion and one of the largest country estates in Norfolk with over 1,000 years of fascinating history. It is said to be built on the site of Anne Boleyn's birthplace before the family moved to Hever Castle in Kent where she spent a lot of her younger days and had frequent visits from King Henry VIII during their courtship. Blickling Hall today is now cared for by the National Trust and has no visible remains of the original Boleyn manor and land other than a dry moat ringing the Hall which is now planted with roses and hydrangeas. However, when Blickling Hall was built the site of the original Boleyn manor was not completely destroyed to make way for building. Instead, the original walls were carefully encased in the Hall and are now hidden behind the Hall's decorative wood panelling.

Anne Boleyn was married to King Henry VIII and crowned Queen of England on 1 June 1533 but was famously beheaded in London on the orders of her husband when he became frustrated that she didn’t bear him a son and heir. Her father, Sir Thomas Boleyn, did nothing to help her - he stood by as his daughter and son, George Boleyn, were executed for high treason, incest and adultery. It is now said that her headless ghost returns every year on the anniversary of her execution on 19 May. As the day becomes night and it gets closer to midnight, Anne Boleyn’s ghost rides along the driveway up to the house in a coach drawn by four spectral horses and a headless horseman, with her own head on her lap. The moment the coach arrives in front of Blickling Hall the coach vanishes into thin air and Anne Boleyn, wearing a white or grey dress, enters the Hall and roams the corridors and rooms until the early hours of the next morning. It is also said that when news of Anne's death reached Blickling in 1536 four headless horses were seen dragging the body of a headless man across Norfolk. The National Trust, who now care for Blickling Hall, arrange events to mark the fateful anniversary every year.

Anne Boleyn’s father, Sir Thomas Boleyn, is also said to haunt the Blickling estate, having been cursed for taking no action to prevent two of his children being executed by Henry VIII. Each year his ghost has to attempt to cross 12 bridges before cockcrow. His frantic route takes him from Blickling to Aylsham, Burgh, Buxton, Coltishall, Meyton, Oxnead and Wroxham.

National Trust staff have had encounters with a lady dressed in light grey and white who some believe is the spirit of Anne Boleyn returning to her childhood home. An administrator for the Trust, Mr Sidney Hancock, saw a woman walking by the lake and, thinking she was lost, he asked if he could be of any assistance. She replied "That for which I seek has long since gone". The administrator looked away briefly and when he looked back the lady had completely vanished.

A member of the National Trust library staff also witnessed a grey lady in the Long Gallery library in 1979 looking at books. The figure slowly faded away leaving a book open at a picture of Anne Boleyn. In 1985, on the anniversary of Anne's execution on 19th May 1536, an employee was woken at Blickling after hearing footsteps coming into his bedroom.

Blickling Hall is about 27 miles from Caister Holiday Park.

Today is:
Copyright © 2017-2022 caistercaravan.co.uk. All rights reserved.
CaisterCaravan is not responsible for the content of external sites.
Designated trademarks, logos, brands and images are the copyright and/or property of their respective owners.
Great Yarmouth Tourist Office, Maritime House, 25 Marine Parade, Great Yarmouth NR30 2EN
www.great-yarmouth.co.uk
You are here:
Ref: 4882 11159