Hauntings and Ghosts on the A47, Norfolk
CAISTER HOLIDAY PARK Sat: NR30 5NH 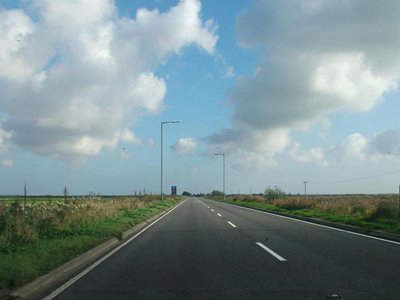 Haunted A47 Acle Straight in Norfolk

Acle Straight (A47) and Paranormal Activity

The haunted Acle Straight is part of the A47 trunk road in Norfolk and runs east/west between Acle and Yarmouth for 9 miles with only one slight bend. It is known as Acle New Road and is a notorious accident spot with one turn-off called Branch Road between Seven Mile House on the River Bure and Halvergate village to the south. The railway line between Great Yarmouth and Norwich runs parallel to the road on the southern side and the River Bure flows on the northern edge.

The nine mile Acle Straight, which crosses uninhabited marshes and wetlands, and has fine views of the 80 year old Caister Water Tower, was constructed by digging two parallel ditches 11 metres apart, was opened in 1831 to shorten the distance between Great Yarmouth and Norwich by just over 3.5 miles over reclaimed land which was once under the sea. Before this road was built travellers faced long detours of up to 30 miles as there was no practical alternative route.

Like some other dangerous and lonely roads, the Acle Straight has its share of reported hauntings and strange and unexplained happenings which do not directly relate to recent events and driving incidents. The most well-known report of paranormal activity on the road is that of a car driver passing the turning for Halvergate whilst heading towards Acle who saw a middle-aged man suddenly walk out across the middle of the road from the right-hand side. This happened so quickly that the driver had no time to stop and, despite his efforts and with the figure turning towards and looking at him, his car drove straight 'through' him. There was no physical evidence of any vehicle and pedestrian accident afterwards.

There have also been reports of a phantom horse and cart moving across the road directly in front of oncoming vehicles, and of car drivers suddenly feeling the need to perform an emergency stop at various places along the road for no obvious reason. A strange figure with no visible face has sometimes been seen standing at the side of the road.

CaisterCaravan offer a fully equipped, deluxe 3 bedroom (8 berth) static caravan at Haven's Caister-on-Sea Holiday Park in Norfolk for family holidays, staycations and short breaks. Situated in a quieter area away from the main holiday park entrance, this comfortable caravan is just a one minute stroll from the wide, sandy beach. Caister Holiday Park has all the activities and facilities you would expect from one of Britain's largest and oldest holiday parks. Book this caravan cheaply through 2cHolidays with their easy-to-use, safe and secure booking system.

Today is:
Copyright © 2017-2022 caistercaravan.co.uk. All rights reserved.
CaisterCaravan is not responsible for the content of external sites.
Designated trademarks, logos, brands and images are the copyright and/or property of their respective owners.
Great Yarmouth Tourist Office, Maritime House, 25 Marine Parade, Great Yarmouth NR30 2EN
www.great-yarmouth.co.uk
You are here:
Ref: 4924 11201