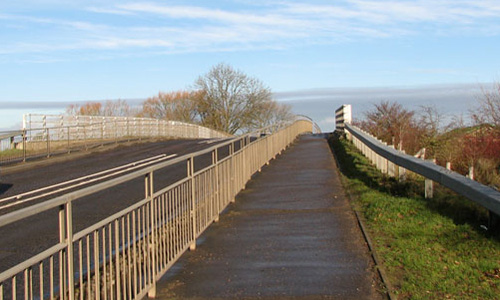 There is an old, ghostly tale that claims that the original three-arched bridge over the River Bure in Acle, Norfolk, was the setting for two brutal murders many years ago. The original single-span bridge has now been replaced with a modern single-span structure, in the same position as the original, which carries the A1064 road over the river from Acle towards Caister-on-Sea and Thurne. It is said that on the anniversary of the first murder a pool of blood appears in the centre of the bridge during the night on the 7th April of each year and that a horrendous ghostly apparition shrouded in mist can sometimes be seen rising from the murky depths of the dark, cold river. This tale, which is still repeated by some local people, refers to a local corn and meal trader called John (or Joshua) Burge who cheated his customers, regularly beat his wife and was cruel to his children. The family lived in a house close to the three-arched bridge and life for them was incredibly stressful.

One day in another fit of terrible rage, John Burge went too far and killed his long-suffering wife. Given his violent track record with his family and business relationships he was quickly arrested and sent to Norwich to await trial. Just before the trial, Burge had managed to bribe the local doctor who now claimed Burge's wife died of a heart attack. Accordingly, John Burge was considered innocent of murder and subsequently released.

His wife had a brother who was outraged with the release and started to plan his revenge on Burge for the murder of his poor sister. He found out that Burge was due to return from a business trip to Great Yarmouth so on that day (on a later 7th April as it turned out) the brother lay in wait on the bridge in Acle armed with a butcher's knife. When Burge appeared walking across the bridge later that night he was attacked by his wife's brother and killed instantly. The brother left Burge's body in a pool of blood on the bridge then made his escape by going to Great Yarmouth and taking a ship away from Norfolk for a while.

The body of Burge was discovered by a local man named Jack Ketch who had previously been cheated in a business deal with Burge. He was known to have said that he would one day get his revenge. Unfortunately for Ketch, the police then accused him of carrying out the murder and he was tried and convicted of murder and hanged.

After a few years away the wife's brother returned to Acle and pretended he was surprised at Burge's death. For some strange reason, the brother decided to visit Acle Bridge again - the same night one year previously he had killed Burge. The brother stood above the middle span of Acle Bridge and looked down into the dark river below. As he was looking into the murky water of the river a ghostly, misty figure appeared on the surface and started to drift towards him.

The brother's body was found the next morning with its throat cut seemingly with a large butcher's knife. Local people believed that the ghostly spectre was either that of Burge or of the innocent man Ketch who was hanged for a murder he did not commit. So, the blood of one of the two murdered men on the bridge is what is said to appear on the bridge during the 7th April anniversary each year.

Today is:
Copyright © 2017-2022 caistercaravan.co.uk. All rights reserved.
CaisterCaravan is not responsible for the content of external sites.
Designated trademarks, logos, brands and images are the copyright and/or property of their respective owners.
Great Yarmouth Tourist Office, Maritime House, 25 Marine Parade, Great Yarmouth NR30 2EN
www.great-yarmouth.co.uk
You are here:
Ref: 3487 3153