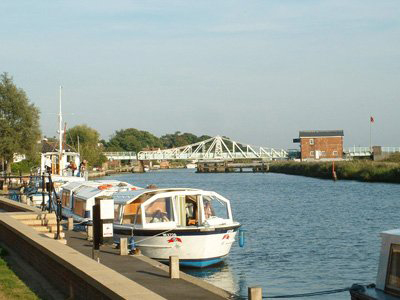 Quay and Swing Bridge at Reedham

The Attractive Village of Reedham

Reedham is a pretty riverside village on the northern bank of the River Yare and provides the only road crossing point between Norwich and Great Yarmouth. The village has an attractive quay lined with pretty cottages, a shop, tea room, a couple of pubs and Pettitts Animal Adventure Park for family fun with rides, animals, live shows, dinosaur crazy golf and so much more. Just outside the village is the only vehicle chain ferry on the Norfolk Broads. The railway line between Norwich and Lowestoft crosses the River Yare on Reedham Swing Bridge a short distance away.

It is now believed that the site of Reedham's 15th century church, St John the Baptist, has its roots in Roman times and has been one of East Anglia’s most mysterious sites for some time. Recently it was found that the original building was built out of a grey ‘sparkly’ sandstone called Leziate Quartzite and although this material is found in other churches throughout East Anglia none have the quantities of Reedham. This, together with the thin tiles used in its construction, leads historians to believe that the site was once the home of a Roman fortlet built to help protect the supplies on their way to the northern Roman frontier and Hadrian's Wall.

Back to Norfolk Broads Index