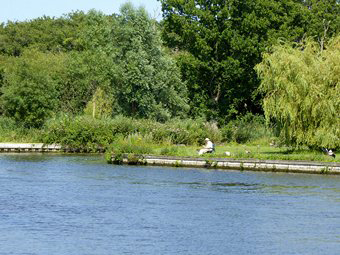 Fishing on The Norfolk Broads

Looking Back to Fishing on the Norfolk Broads

In the Norfolk Broads and rivers bream, roach and rudd were plentiful, carp were occasionally met with, especially in the River Waveney, tench were sometimes taken, and the capture of large perch was often recorded. Pike were not so abundant as in previous times, but still provided good sport. Large quantities of eels were caught in sets (nets which the fishermen spread across the rivers from bank to bank), and smaller quantities were taken with an eel-spear and by 'bobbing' with a bunch of worsted-threaded worms. Smelts were netted every year at the Burgh end of Breydon Water. Grey mullet were known to exist in Oulton Broad, but anglers seldom saw anything of them. Dace were often taken in the neighbourhood of the locks and elsewhere, and ruffes were common in some of the Broads.

During the 19th century the rivers Yare, Bure and Waveney, and their tributary streams, provided the best fresh-water fishing in the country but, according to a petition sent up to the Houses of Parliament in 1876, "through the absence of any powers of conservation or regulation, the most deplorable and wanton destruction of fish" was carried on. Some time after this petition was forwarded, the late Mr Frank Buckland was directed to make inquiry into the reported falling-off in the quantity of fish. Having made a full investigation he reported that the Broads and rivers were extensively netted, and "tons and tons" of fish sent into the Midland districts during the spawning season. There was no close season; the waters were netted with small-meshed nets whenever there was a market for the fish. A Mr Bly of Great Yarmouth informed Mr Buckland that at the North Quay he had frequently seen "large quantities of fish delivered from wherries, and sometimes as much as two tons in the hold of one wherry; they consisted of roach, bream, perch etc, of all sizes and ages." Another witness said he had known two tons of fresh-water fish, caught in the rivers and Broads, to be sold very cheaply at Great Yarmouth. Although it did not come out in the evidence, it was well known that a Lowestoft fish-merchant obtained hundreds of pounds a year by the sale of fresh-water fish from Broadland, and that a smack had even gone so far as to trawl up the rivers! Having heard the statements of many witnesses, Mr Buckland concluded that "the time had now arrived when it is imperatively advisable that the fresh-water fisheries of Norfolk and Suffolk should be scientifically cultivated. From personal observation (he added) I am enabled to state that the rivers and Broads are most admirably adapted for the breeding and fattening of such indigenous fish as belong to the species of carps, breams, perches and so forth." He recommended that the golden tench, spiegel carp, pike-perch, great lake trout from Switzerland, and the American brook trout be introduced into the Broadland waters.

The passing of the Norfolk and Suffolk Fisheries Protection Acts put a stop to all netting except for smelts and eels. Pike-snaring was also made illegal, and except on one or two Broads, where there were special rights, the laying out of liggers or trimmers was not allowed. But the improvements in the fishing and the increase of fish looked for by Broadland anglers did not come up to their expectations. The fish did not appear to be more plentiful or average larger than the pre-protection days. This may have been due to the frequent dredging of the channels, clearing away of water-weeds, and the consequent increase in the rapidity of the outflow of the waters, which resulted in the detachment from the weeds of large quantities of spawn, and its being carried out to sea.

Today is:
Copyright © 2017-2022 caistercaravan.co.uk. All rights reserved.
CaisterCaravan is not responsible for the content of external sites.
Designated trademarks, logos, brands and images are the copyright and/or property of their respective owners.
Great Yarmouth Tourist Office, Maritime House, 25 Marine Parade, Great Yarmouth NR30 2EN
www.great-yarmouth.co.uk
You are here:
Ref: 4904 11181