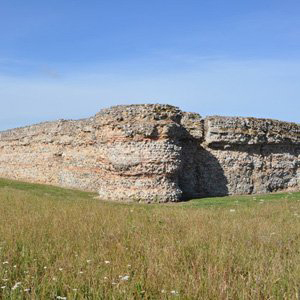 The Ruins of Burgh Castle in Norfolk

Burgh Castle was once one of several Roman shore forts built to defend against the Saxon raids on the east and south coasts of Britain. The ruins are just a short distance from Caister-on-Sea and Great Yarmouth in Norfolk. Burgh Castle was constructed around the 3rd century and was designed to hold Roman cavalry and their supplies, and was known as one of the 'Forts of the Saxon Shore'. These were intended to protect Britain from attacks by raiders and pirates from across the North Sea. Now, it is one of the best preserved Roman monuments in East Anglia with wonderful views westward over the rivers Yare and Waveney and across Breydon Water and the Norfolk Broads.

The fort is basically a rectangle measuring approximately 200 metres by 100 metres, and the walls were once about 4.5 metres high. However, only the walls on the north, east and much of the south side are still standing along with the remaining six solid bastions which provided the Roman garrison with a formidable defence.

Burgh Castle was later to become the site of a Norman castle and possibly an early Christian monastery but this has not been confirmed by all of the interested historians. The Norman castle was constructed in the 11th and 12th centuries in the south-west corner of the site.

Burgh Castle is now owned by the Norfolk Archaeological Trust with the castle ruins being looked after by English Heritage. A circular all-access, wheelchair-friendly route around the fort includes a boardwalk along the Angles Way. The site is about 6km south-west of Great Yarmouth and there is a free coach and car park about 600 metres away in Butt Lane. Please note that this car park is locked at 6pm each day. The Burgh Castle site does not have any toilets or other facilities but the Burgh Castle pub (the Queen's Head) is nearby, at the junction of Church Road and Back Lane.

The late 3rd century 'Saxon Shore' fort at Burgh Castle was built as part of the Roman network of coastal defences, and probably abandoned just over a hundred years later. Three of its imposing stone walls survive, almost to their original height, making this one of the best preserved Roman monuments in Britain. The fourth wall collapsed into the surrounding marshes a long time ago. The land around the fort is a wildlife haven and offers panoramic views over Breydon Water. From a small price for a year's membership, English Heritage members enjoy unlimited access to over 400 historic properties across the country, a whole year’s worth of fun days out, free entry for up to six accompanying children per adult member, free or reduced-price entry to exclusive members’ events giving you access to our experts and a glimpse behind the scenes.

Today is:
Copyright © 2017-2022 caistercaravan.co.uk. All rights reserved.
CaisterCaravan is not responsible for the content of external sites.
Designated trademarks, logos, brands and images are the copyright and/or property of their respective owners.
Great Yarmouth Tourist Office, Maritime House, 25 Marine Parade, Great Yarmouth NR30 2EN
www.great-yarmouth.co.uk
You are here:
Ref: 4873 11150